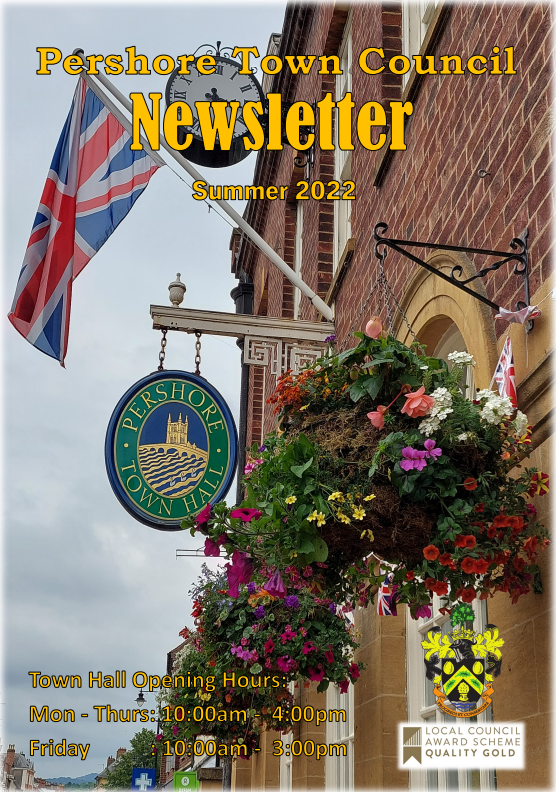 Visitor Information currently based at the Town Hall.

Welcome from the Town Clerk…

Welcome to the summer edition of the Town Council newsletter. By the time you read this, HM the Queen’s jubilee celebrations will be over and we will be looking forward to our summer programme of events, see the end of the newsletter for a list! This year, in July, the Commonwealth Games baton relay will be coming through Pershore. Timings are uncertain but it is anticipated this will be on the afternoon of Friday 22nd July and the baton will be carried from Bridge Street, through the High Street to its junction with Cherry Orchard. Why not come and watch this historic event and wave a flag? There will be entertainment in Chapman Court and bunting everywhere!

This summer also sees the welcome return of Bands in the Park following two years with Covid restrictions. Funds have not allowed us to have a band every Sunday afternoon this year but we will start off on Sunday 3rd July with a band every other Sunday until the end of August. More details on page 10.

Finally, you will see that for the summer months at least, the Town Hall will be open a little longer on a Friday afternoon. This is mainly to provide a better service to visitors but of course residents are very welcome to make use of this extended service.

A Message from the Mayor and Consort…

Summer, that most anticipated of seasons, is upon us. Clouds part, the sun shines, and we, the people of Pershore, know just what to do: make merry. And make merry we have done, and will continue to, for this summer offers plenty to do.

One such opportunity was Pershore’s Carnival. I don’t think it an exaggeration to state that it was one of the finest we’ve had in a very long time. I congratulate Mr. Colin Shepherd and his colleagues.

Her Majesty’s Jubilee saw many street parties held across town; that so many occurred speaks to the great sense of community we enjoy here in Pershore, and the depth of gratitude so many of the Queen’s subjects have for her unprecedented period of service. The Town Council played its part, too. Bunting was distributed to local businesses, a beacon was lit on Allesborough Hill, and a ‘Picnic in the Park’ was laid-on, with entertainment provided by a local band, ‘Shades of Grey’. My thanks to everyone who helped with these.

In addition, the Council has been making preparations for the summer season with the creation of a new picnic area beside King George’s Field, and the completion of refurbishment work to Princess Diana’s Garden.

I am conscious that this is my first Mayoral Address. It is my great privilege to address you as your Mayor, and to continue serving the town I have called home for most of my life. Pershore is a blessed place, and it is the responsibility of each and every one of us to ensure it remains as such. Let us do so this summer, as we celebrate living in our slice of God’s Own Country.

Annual Report from the Town Mayor 2022

At the Annual Meeting, held in the Council Chamber at the Town Hall on 12th May 2022, Cllr Julian Palfrey presented the Annual Report:

Annual Report From The Town Mayor 2022

Please see below charts showing how the Council has spent your money during the year to 31st March 2022. If you would like more detailed information, or a set of the accounts, please contact the Town Clerk after the end of May. 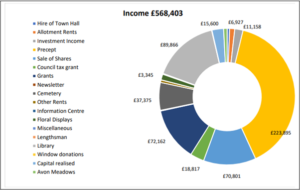 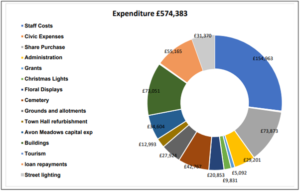 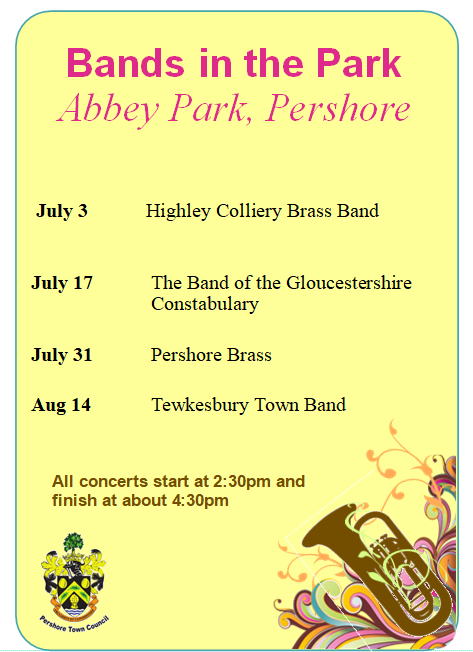 July 17        The Band of the Gloucestershire  Constabulary

Earlier this year Pershore and District Volunteer Centre had a hugely successful fundraising campaign to purchase a new electric minibus and we are enormously grateful to all who contributed to our success.

In order to avoid a lengthy delay in delivery, we took the decision to buy a higher specification vehicle that was available at a great price. This means that our new vehicle, Sparky, is available for immediate use! However, it also took all the money raised, which left us seeking new sources of funding for training, recruitment of new drivers and passenger assistants, and also for a vital adaptation to the new vehicle to allow the front seat to be lowered to pavement level to assist those with mobility issues.

To meet the demand of our community transport fleet we need to recruit and train 12 drivers and 7 passenger assistants, all of whom will be volunteers, to ensure that passengers are transported safely and comfortably.

Pershore Volunteer Centre aims to place volunteering and wellbeing at the heart of the local community to reduce rural and social isolation in our communities, and our provision of transport to those who would otherwise be isolated in their homes is fundamental to achieving this. Should you, your organisation or business feel able to help us raise the £11,000 required to train and accredit drivers and passenger assistants, and to fund the important adaptations to the vehicle, please contact us at Pershore Volunteer Centre on 01386 554299 or ceo@pershorevolunteers.org.uk

People in Pershore and the surrounding villages rely on us to get to medical appointments, day care centres, social outings and to go shopping in the local area. You will be helping individuals, businesses, and the community by helping us! 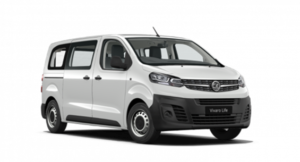 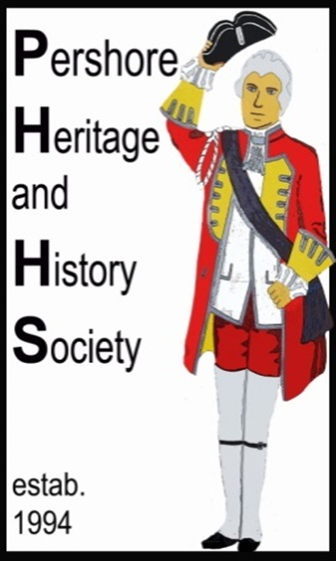 A Brief History of  ABBERTON

Abberton is an ancient parish which is surrounded by Rous Lench, Flyford Flavel and Bishampton. Once it was part of Pershore Abbey. In the charter of King Edger 972 A.D. it was called Eadibrihtinegtune, and many other variations. It was a Berwick, which was part of an estate or manor.

In the Doomsday book it was said to be very small 4.3 households, Total tax 2.3 geld units (quite small).

At Abberton the Abbey kept two year old sheep and lambs, more sheep were kept at Broadway and Leigh totalling about six hundred. Several villages also kept cattle, pigs and fowl for the Abbey. The Abbey also had eleven mills, one at Abberton, and other villages. Following the dissolution of the Abbey in 1544, William and Francis Sheldon were granted the site of the monastery together with pastures and manors at Pershore. This grant formed part of a much larger one and they paid £500 14s 4d.

Abberton was one manor they kept and several places around other villages, and the advowson of Abberton church (This refers to the right to choose the vicar or rector of the parish) The church is dedicated to St. Edburga; there are windows of her story in Pershore Abbey.

The Sheldon family lived in Abberton Hall before this date and until 1841, when the family died out. The last Sheldon living there was Lucy who married Samuel

Lessingham whom by royal decree was named Sheldon, Lucy died in 1839 and Samuel died in 1852 at Hanley Castle. In the church there are many monuments to the Sheldon family.

Abberton Hall and manor was bought by William Laslett (M.P. for Worcester City many times). He swapped from Conservatives to Liberal but lost out later and never went into office again.  He was, for many years associated with all the benevolent and charitable works in Worcester and around the shire. He had Abberton Church rebuilt in 1882 with a spire which could be seen from all around. He also bought Hinton on the Green and put into a trust for the Laslett Almhouses in Worcester. He gave the land in Worcester for the cemetery where the crematorium is now and many churches were also repaired. After the opening of Flyford Flavell church, which he had paid for, it was a very wet day and he caught a cold, which got worse and he also had paralysis in the left side. Doctor Rusher from Pershore attended to him before he died in January 1884. William Laslett was buried at Abberton.

In his will he left most of the manor to Baker-Carr, a relative of the Bishop of Worcester whose daughter he married. They never lived there but it was rented out. In 1905 the manor was sold and in 1915 another sale of the manor took place although the estate was much smaller by then.

In 1962 the spire of the church was taken down due to danger from the new “V” bombers as the centre of approach to the main runway was in line with the church spire, so The Ministry of Aviation brought the case to court and won. 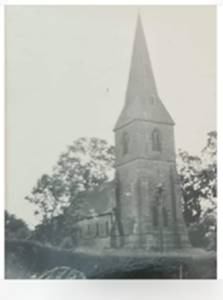 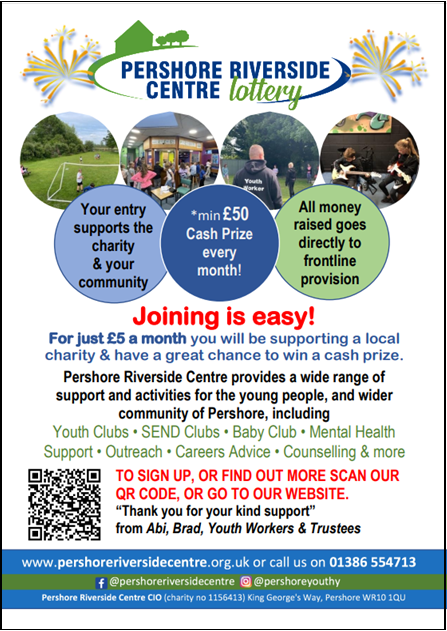 For just £5 a month you will be supporting a local charity and have a great chance to win a cash prize.

Pershore Riverside Youth Centre provides a wide range of support and activities for the young people and wider community of Pershore including:

Carpark Developments: The car park, recently taken back by the Town Council,  has been tidied and greatly improved by them. There is a fenced off picnic area with tables providing a nice area to sit and eat your sandwiches overlooking the river. It was opened by the Mayor of Pershore in time for the Easter weekend and has opened up the town to the river for visitors and residents alike.

Work parties: Volunteers repaired the bird screen which lost part of its roof in the recent stormy weather. The bird nesting season has started so reed cutting has stopped. Attention has turned to path maintenance as plants begin to start growing in the recent mild weather. The lack of rainfall has resulted in the ground drying out rapidly and the water table is now almost 2 feet below the surface

The work on developing the wild flower population continues. With the help of a £700 grant arranged by Counsellor Dan Boatwright (for which very many thanks!), we have purchased over 1,000 plug plants which a band of enthusiastic volunteers have now planted in a series of extra work parties during March. The original plan was to buy seed but supplies of the right seed have proved difficult to obtain so it was decided to try an alternative approach. After careful consideration, the species selected for planting were; Ragged-robin, Lychnis flos-cuculi, Birds-foot trefoil Lotus corniculatus, Betony Stachys officinalis, Lady’s Bedstraw Galium verum, Devil’s Bit Scabious Succisa pratensis, Rough Hawkbit Leontodon hispidus and Oxeye Daisy Leucanthemum vulgare. These are all species that should occur naturally in this type of meadowland, it will be interesting to see what survives in our particular conditions. 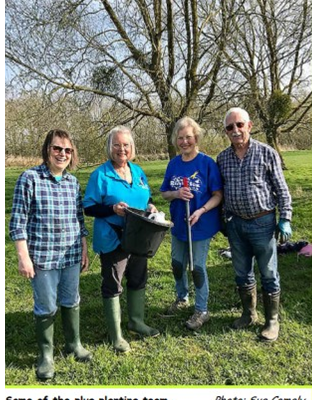 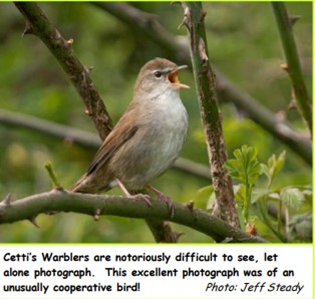 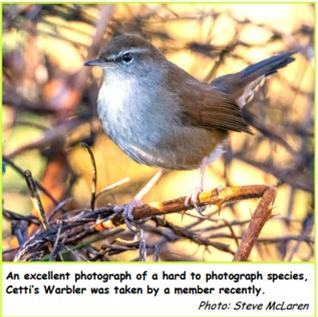 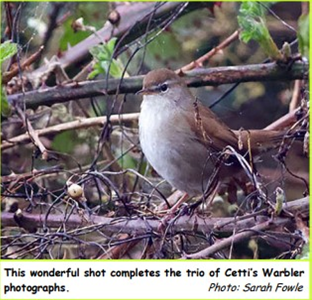 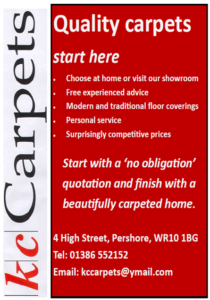 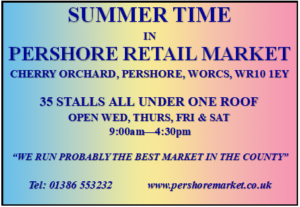 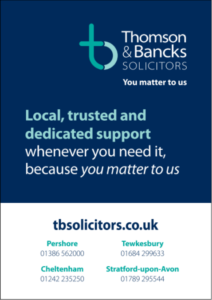 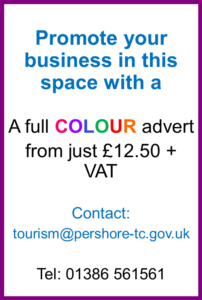 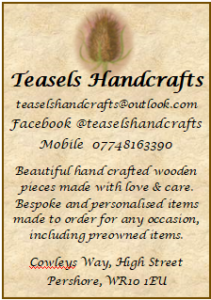 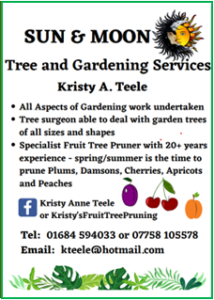 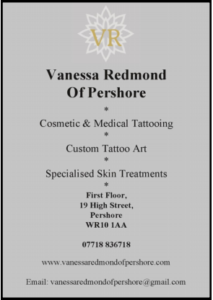 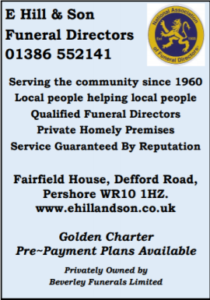 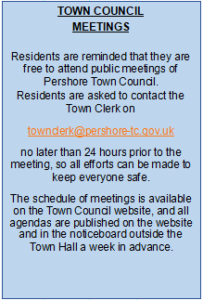 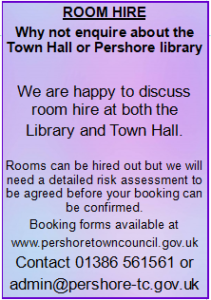 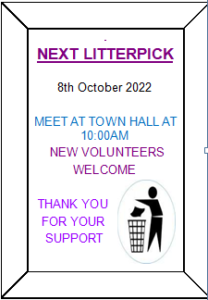